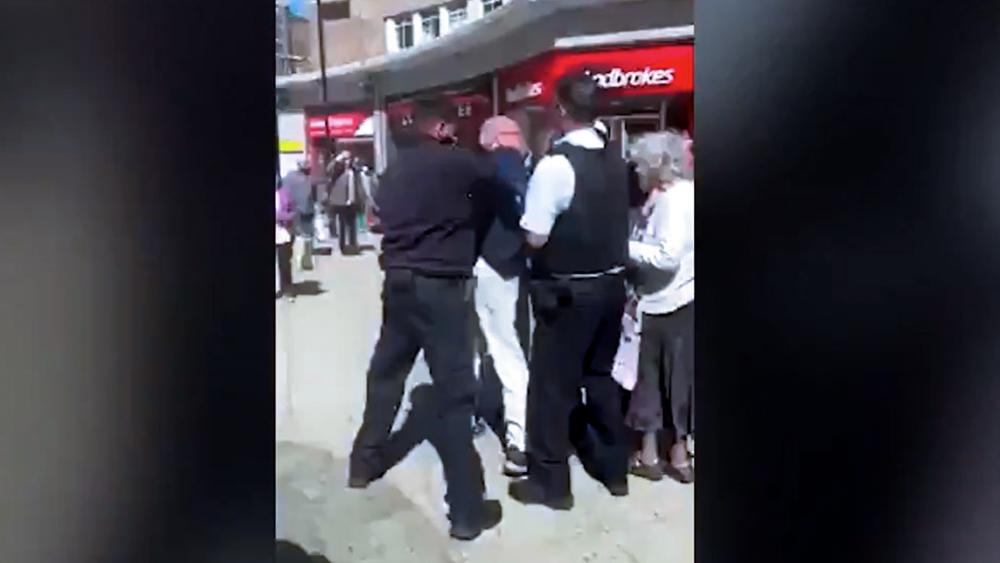 A screenshot from the video of Pastor John Sherwood's arrest by police in northwest London on Friday. Sherwood can be seen in the middle of the image. (Screenshot credit: Christian Concern)

A UK Christian street preacher was arrested by police in northwest London on Friday and spent the night in jail because he proclaimed what the Bible says about marriage on a public street.

Simpson described what happened to Sherwood in an article for the Conservative Woman website on Tuesday. Sherwood, who's in his early 70s, was preaching to people on the final verses found in Genesis 1 of the Bible's Old Testament.

"God's design in creating mankind was to set human beings in families, headed by a father and a mother, not by two fathers or by two mothers," he said. "The distinction within mankind of just two genders, male and female, made in the image of God, constitutes the essence of God's created order."

Simpson said a number of police officers appeared and began telling Sherwood they had received three complaints about his preaching. An officer reportedly warned him not to make any "homophobic statements."

After speaking to the police, Sherwood resumed his preaching, speaking on freedom of speech. However, a couple of bystanders in the crowd apparently shouted that his preaching was "homophobic" and "hate speech," and the officers returned to the scene.

One of the bystanders captured Sherwood's arrest on video and posted it to social media. The video shows Sherwood standing on a step stool as two police officers are talking to him. Much of their conversation is garbled. However, one police officer who can be heard, asks Sherwood to come down, and the preacher answered him. Then the officer tells Sherwood he is "under arrest" and he needs to "come down." Then three police officers are seen pulling Sherwood off the stool.

As one police officer is holding Sherwood's arm, the preacher tries to pull his arm up. This seems to anger the officer who appears to stop himself from kicking the elderly man.

Then two other officers step in to force Sherwood's hands behind his back, roughly treating him as they put him in handcuffs.

"This dignified man of God, who is in his early 70s, was marched off to a nearby police car, as one of the helpers from my church cried out, 'What has happened to us as a nation that a man can no longer preach from the Bible?'" Simpson recalled.

Christian Concern, a Christian rights watchdog in the UK, tweeted the video of Sherwood's arrest, writing: "Arrested for preaching the Bible in North West London. Pastor Sherwood is 75, notice how the arresting officer kicks him?"

Arrested for preaching from the Bible in North West London. Pastor Sherwood is 75, notice how the arresting officer kicks him? pic.twitter.com/iwAojPMaNm

In a statement given to Premier Christian News, a spokesman for the Metropolitan Police said: "At 13:35hrs on Friday, 23 April, officers on patrol were flagged down by a member of the public who made them aware of a man allegedly making homophobic comments close to Uxbridge Underground Station."

"A number of other people also approached the officers with concerns about the man's language. Officers spoke with the 71-year-old man and he was subsequently arrested on suspicion of an offense under Section 5 of the Public Order Act," the spokesman said.

The outlet also reported Sherwood remains under investigation as his case has been forwarded to the Crown Prosecution Service for further review.

The elderly pastor spent the night in a detention center located near Heathrow Airport and was not released until noon the following day, according to Simpson.

Sherwood told Breitbart that during his stay in jail, he was questioned by officers about what he would do if he had a homosexual child.

"It is surely the task of police to ask questions about the specific alleged offense, not more general questions about why someone holds a personal view on an aspect of Biblical morality," he said.

This is not the first time Christian street preachers have had a run-in with the London police.  As CBN News reported in February of 2019, preacher Oluwole Ilesanmi was wrongfully arrested by police when he was falsely accused of 'Islamophobia'. Video of Ilesanmi's arrest went viral on social media.

The viral video of the incident showed police yanking a Bible from Ilesanmi's hand, while he was pleading "don't take my Bible away. All I wanted was for them to understand the Word of God."

One month later, the Metropolitan police told CBN's Faithwire that, after it became clear that Olu had done nothing wrong, he was subsequently "de-arrested" and no charges were filed.

Ilesanmi was later awarded around $3,100 by Scotland Yard in July of 2019 after an investigation into the incident.

A metropolitan police spokesman said: "The Met respects and upholds the rights of all individuals to practice freedom of speech, and this includes street preachers of all religions and backgrounds. However, if the language someone uses is perceived as being a potential hate crime, it is only right that we investigate. In this case, it was deemed appropriate to remove the man from the area," according to Dailymail.com.