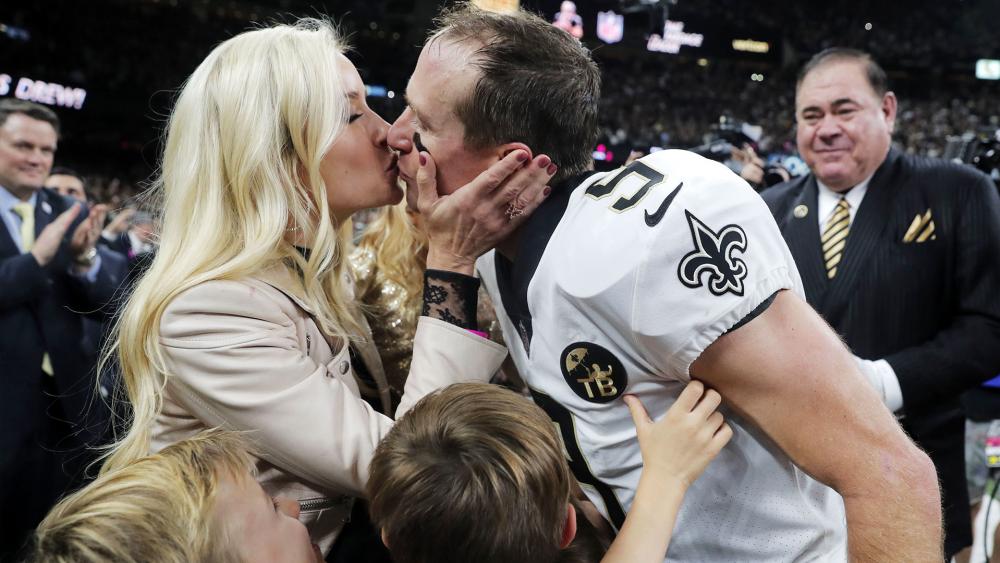 Drew Brees kisses his wife after becoming the #1 NFL passer of all time.

Some of the top quarterbacks in the NFL these days all happen to share one thing in common – they call Jesus Christ their Savior and Lord, and they're not ashamed to talk about it.

On any given Sunday, you can catch these incredible athletes tearing up the football field. But they can also be quite eloquent when talking about their Christian faith and what matters most in life.

Among these top quarterbacks are the two leaders of the 2018 Super Bowl-winning Philadelphia Eagles, Nick Foles and Carson Wentz, and the #1 NFL passer and Super Bowl champ Drew Brees.

Here are some great quotes from 10 faith-filled quarterbacks:

"I live for God, for the faith that I have in Him, and knowing the sacrifices that Jesus Christ made on the cross for me, and just feeling like it's in God's hands and all I have to do is just give it my best, commit the rest to Him, and everything else is taken care of. That takes a weight off my shoulders," Brees once told CBN.

After his season-ending injury a few years ago, Wentz said, "Obviously, It's been a rough day for me personally, I am not going to lie. I have a ton of faith in the Lord and in his plan. But at the end of the day, it's still been a tough one. And it will be tough on me for a little bit... As I reflect tonight, I just know the Lord's working through it, and I know Jesus has a plan through it. I know he's trying to grow me in something, teach me something, use me somehow, some way, this will just be a great testimony as I go forward."

"The biggest challenge this off-season was a month after the Super Bowl when I got put on the trading block," Foles told CBN when he was still playing for the Eagles. "Then you think, 'I can be a starter, I've proven that.' Then you get sort of distracted. But that's where staying rooted in Christ, going through it, trusting him but struggling, there's times I struggle. And then it was just getting ready to go back to Philly to be a back-up... Life is meant to be lived in fellowship, with one another. To me, relationship in Christ is a relationship, not a religion, and I'm just grateful for it. God always has a plan, you just got to trust it."

"I learned He's decisive and the Holy Spirit is never confused. So if there's disagreement, the problem is probably on our end, not on His. He's always spoken to me through His peace. We have the benefit of other experiences where we've trusted Him. So here we are again, making that decision to come here and believing God is in it!" Cousins told CBN.  "I think at times where I fail as a leader is probably when I haven't allowed the Holy Spirit to lead and when I do allow the Holy Spirit to handle it - I think that's when I'm most successful as a leader."

“First, I just want to thank God because without Him none of this would even be here,” Mahomes said after receiving the MVP award in 2019. "Man this is crazy! God is amazing!"

"Those things that we have in this world that are of the world, man, they don't last. You know, they're over. And if you count on those things to be everything for you, they're just going to let you down. Just like we had an incredible moment one week and it let us down the next week. But if you hold onto your relationship with Christ and your relationship with your family and those people that, you know, that will be with you, that care about you, that's what's most important," Keenum told CBN.

"I have a very strong faith in God. He is the reason I play football. He has given me this special talent and I want to use it to glorify Him. I am grateful for the opportunity to further His kingdom by sharing my faith on and off the football field. At any moment, any second, my football career could be taken away but my faith and relationship with God will never be taken from me," Carr says on his website. "Being a Quarterback is what I do but it does not define who I am. I am first and foremost a follower of the Lord Jesus Christ."

MORE: Meet the NFL Quarterback Who Heard the Voice of God and Saved Three Lives

"In terms of my faith I believe I'm here for a reason," Wilson told CBN. "I believe God placed me in this city for a reason. That never wavers for me, I'm going to trust that the Lord's put me here."

"My faith has always been very important to me," Rivers told Rock Church Pastor Miles McPherson in 2017. As a married father of 8 children, he said, "I think that the center of our marriage and the foundation of our relationship was on Jesus. That is why it's worked to this point."

MORE: NFL's Philip Rivers Credits the Success of His Marriage to Jesus

"I have had struggles throughout my life and am so thankful to have Jesus Christ to turn everything over to. God is in control. When I turn my pain, sadness and stresses over to Him, instead of worrying about them, I find I live a much happier life," Dalton told BeyondTheUltimate.com