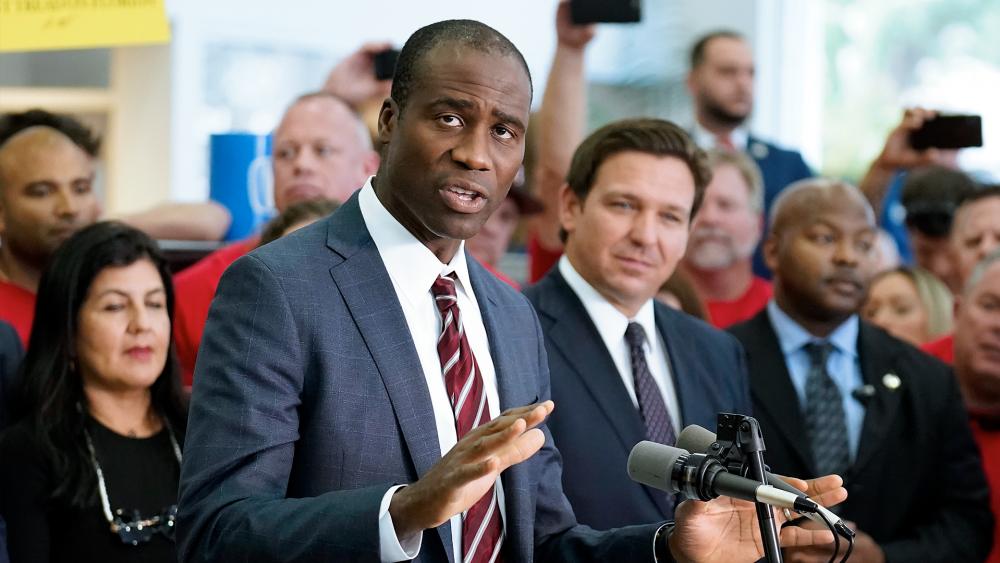 Florida Surgeon General Dr. Joseph Ladapo gestures as speaks to supporters and members of the media before a bill signing by Gov. Ron DeSantis on Nov. 18, 2021, in Brandon, Fla.

Florida's Department of Health (DOH) has rebuked the guidance issued by the Biden administration on gender dysphoria treatment for children and adolescents, releasing its own guidelines instead.

The Sunshine State said on Thursday that puberty blockers and cross-sex hormones should not be used to treat gender confusion in children.

"The federal government's medical establishment releasing guidance failing at the most basic level of academic rigor shows that this was never about health care," State Surgeon General Joseph Ladapo said in a press release. "It was about injecting political ideology into the health of our children. Children experiencing gender dysphoria should be supported by family and seek counseling, not pushed into an irreversible decision before they reach 18."

The department crafted the state's new guidance using published and peer-reviewed data that calls into question the motives of the federal Health and Human Services Department. Guidance of this magnitude requires a full, diligent understanding of the scientific evidence, Florida's DOH said.

The health department also explained, "current evidence does not support the use of puberty blockers, hormone treatments or surgical procedures for children and adolescents experiencing gender dysphoria," citing the following concerns:

To further validate the scientific evidence, the DOH also released its Treatment of Gender Dysphoria for Children and Adolescents Fact Check.

The Florida DOH also released a fact check that details the claims made by the federal HHS.

Drugs that are being used as a puberty blocker in gender-confused youth have been linked to tens of thousands of serious reactions and thousands of deaths, as well as other serious medical issues, according to Food & Drug Administration (FDA) data. In 2019, the FDA documented over 41,000 adverse reactions suffered by patients who took Leuprolide Acetate, known as Lupron, which is used as a hormone blocker. There have been 25,645 reactions considered "serious," including 6,379 deaths.

Liberty Counsel tweeted, "Florida just gets it. Gender-confused children shouldn't be given harmful, dangerous puberty blockers. Or cross-sex hormones. Or a nonchalant option for an irreversible decision before 18. We must protect them, not inject them with political ideology."

As CBN News reported earlier this month, Alabama became the latest state to protect young children from the irreversible effects of gender-changing medications and gender-transition surgeries, approving legislation making it a felony to prescribe puberty blockers or hormones to aid in the gender transition of anyone under the age of 19. If convicted, violators could be sentenced up to 10 years in prison.

Alabama Senate Republicans also added language similar to Florida's "Parental Rights in Education" law that biased media outlets and opponents had falsely labeled as the "Don't Say Gay" law.  The measure prohibits "classroom instruction or discussion on sexual orientation or gender identity" for students in kindergarten through the fifth grade.

Republican Gov. Kay Ivey signed both bills into law, which were quickly challenged by two separate lawsuits by the parents of two transgender teens. According to Birmingham television station WBRC, those lawsuits were dismissed by the plaintiffs, Alabama Attorney General Steve Marshall announced on April 16.

Alabama's law goes into effect May 8.

Despite the medical evidence about the health effects of puberty blockers on children, Walt Disney Company executives reportedly announced last month that the company is planning to fight the state of Texas over its order to investigate transgender medical procedures on children as child abuse.

In an exclusive story, The Daily Wire reported Disney's Chief Human Resources Officer, Paul Richardson, announced the company is planning to "take action" against Texas Republican Gov. Greg Abbott's order to the state's Department of Family and Protective Services to investigate those performing some sex-change surgeries or puberty-blocking efforts on children.

"Because of our presence in Texas," Disney's Richardson reportedly said, "we want you to know that we've signed on to the Human Rights Campaign's letter opposing the Texas bill that criminalizes parents who provide for their transgender children gender-affirming care."

The term "gender-affirming care" is a euphemism used by the corporate media and other LGBT activists for transgender transition surgeries and drugs.

"There is no doubt that these procedures are 'abuse' under Texas law, and thus must be halted," Paxton said in a statement. "The Texas Department of Family and Protective Services (DFPS) has a responsibility to act accordingly. I'll do everything I can to protect against those who take advantage of and harm young Texans."