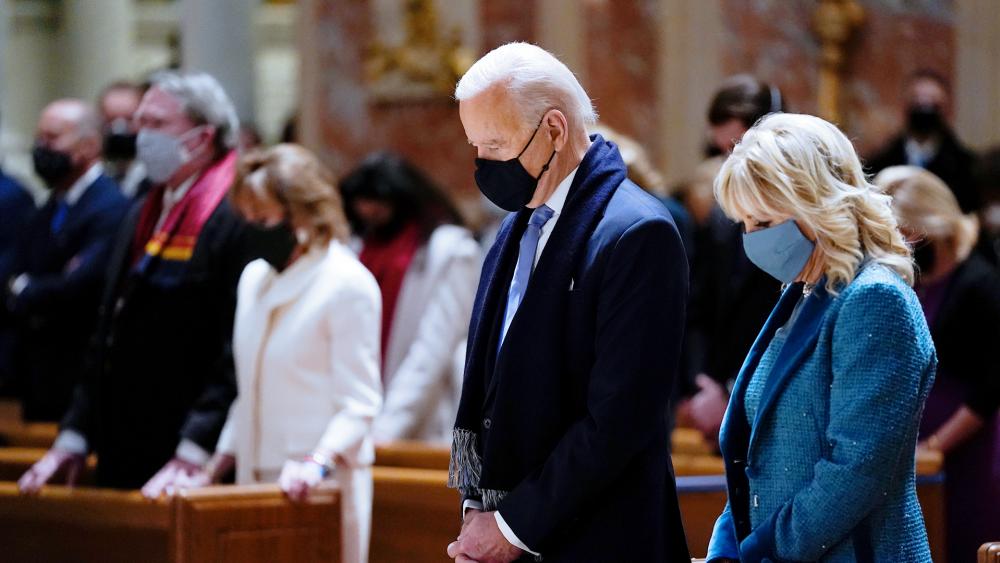 A letter from the Vatican's office of doctrine is urging U.S. Catholic bishops who say politicians who support abortion should be denied communion to move very cautiously in the matter.

The strong warning came in a letter from Cardinal Luis Ladaria, prefect of the Vatican's Congregation for the Doctrine of the Faith, addressed to Archbishop José Gomez of Los Angeles, president of the U.S. Conference of Catholic Bishops (USCCB).

There is division among the bishops, with some pressing for Joe Biden, and other Catholic public figures like House Speaker Nancy Pelosi to be excluded from Communion over their abortion stance. Other bishops warn that such a move would be politically polarizing.

Ladaria's letter said any new policy "requires that dialogue occurs in two stages: first among the bishops themselves, and then between bishops and Catholic pro-choice politicians within their jurisdictions."  It also laid out guidance that could hinder any tough repercussions for politicians who push abortion.

For one, Ladaria said any new statement should not be limited to Catholic political leaders but broadened to encompass all churchgoing Catholics in regard to their worthiness to receive Communion.

In an interesting take on the abortion issue, he also questioned the USCCB policy identifying abortion as "the preeminent" moral issue, saying it would be misleading if any new document "were to give the impression that abortion and euthanasia alone constitute the only grave matters of Catholic moral and social teaching that demand the fullest accountability on the part of Catholics."

Further, he said that if the U.S. bishops pursue a new policy, they should confer with bishops' conferences in other countries "both to learn from one another and to preserve unity in the universal church."

And finally, he said any new policy could not override the authority of individual bishops to make decisions on who can receive Communion in their dioceses.

In the past as a senator, Biden supported the Hyde Amendment that for years stood as a bulwark against using federal tax dollars for abortion. But since becoming president, Biden has backed away from that position. He recently signed a stimulus bill that did not include Hyde amendment protections and that directed some $50 million to Planned Parenthood.

As CBN News reported in January, one of Biden's very first executive orders once taking office reversed the Mexico City policy, which had prohibited U.S. aid money from funding nongovernmental organizations that perform or promote abortion overseas. And in his choice of radical pro-abortion nominee Xavier Becerra to head the Department of Health and Human Services, Biden signaled his determination to overturn President Trump's policies that protected the religious freedom and conscience rights of health workers and doctors opposed to abortion.

Biden's apparent full-throttle push for all things abortion has made many Catholics uncomfortable with a politician who always said he was "personally opposed to abortion" but didn't want to force his religious views on anyone else.

Matthew Bunson, the Washington bureau chief at EWTN, the global Catholic network, recently told CBN News that America's second Catholic president is a "self-professed" Catholic, whose actions are contrary to the teachings of the church.

Bunson said, "To have a Catholic who is presenting himself or herself for communion while publicly in open dissent of the teachings of the church. This is a source of confusion for people, and for the bishops, this is a teaching moment. It's an important teaching moment."

Among the leaders of the campaign to rebuke Biden is Archbishop Salvatore Cordileone of San Francisco, who recently issued a pastoral letter arguing that Catholic politicians who support abortion rights should not receive Communion. A few days later, Bishop Robert McElroy of San Diego published an essay opposing that, saying such an initiative "will bring tremendously destructive consequences."

Father Thomas Reese, a Jesuit Catholic priest and senior analyst at the Religion News Service, told CBN News the bishops are very unhappy with President Biden's position on abortion, but the whole communion question is something else entirely.

"The bishops' conference that meets in June has absolutely no authority to tell President Biden that he cannot go to Communion," Reese said. "Under canon law, they do not have that authority."

"The only person that has authority over who goes to communion in his diocese is the local bishop," Reese explained. "So for Washington, D.C., that is Cardinal Wilton Gregory who has made clear that he is going to allow President Biden to go to Communion."

The question of just how flagrant public figures can be in pushing the abortion agenda and still be considered Catholics in good standing may find some resolution when the US Conference of Catholic Bishops (USCCB) meets on June 16. The USCCB plans to vote on drafting a document on the Communion issue.

It's considered unlikely that Biden would heed any call to forgo Communion, but a USCCB document urging him to do so would be a remarkable rebuke nonetheless.