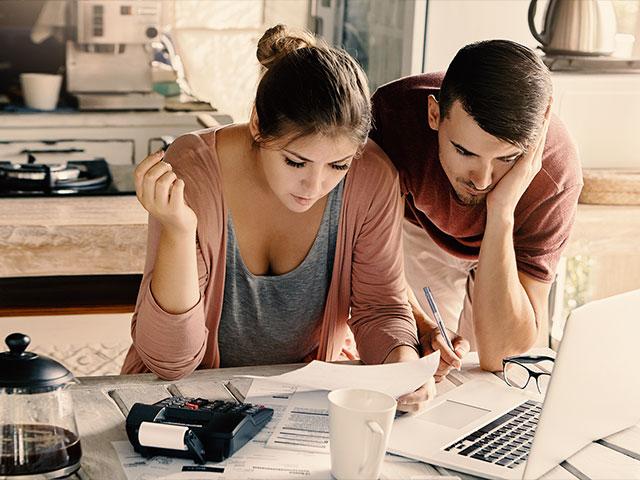 I joke that my husband is my own personal financial planner. He learned about investing in high school when his boss at the time took him under his wing and taught him all about investing and how to be responsible with his money. He considers that one of the most important lessons of his life.

He went to college on a full-ride ROTC scholarship and graduated into a well-paying job in the Navy, debt-free. As the money came in, he dutifully invested, saved and tithed. When he had done his time in the Navy, he already had enough saved up to put himself through grad school.

That man is my financial hero. When we started talking about marriage, I was confident that he was someone who would never blow our financial security.

He, however, could not feel the same way about me!

I brought about $15,000 of unpaid student loan debt into our marriage and my spontaneous spending habits made the process of paying that debt down a very slow one.

He handled it extremely well when I first broke the news about my debt to him when we were dating. However, it was clearly something he was concerned about.

He is not alone in that.

According to a new study from online personal finance company, SoFi, debt is a big deal breaker to 20 percent of Millennials (ages 25-35).

Of the most concerning red flags when it comes to being in new romances, the first is being a workaholic and in a close second--serious debt.

I polled my own friends on Facebook and they got a little more specific, pointing out that it comes down to the type of debt a potential love interest has accumulated.

"Student Loans aren't an issue. It's other debt that shows a possible lack of responsibility and possibly not seeking to be wise with the Lord's provisions," one person responded.

"It depends on what they are paying for with their debt. If she has 10-15k in cc debt for B.S. that's obviously a red flag. If it's student loans, I can't complain. If she's not paying on any of it, run," said another.

SoFi also looked into how much Millennials cared about a person's future earnings when deciding whether to date them or not.

An overwhelming 64 percent said they were more concerned with their generosity.

As the one in the relationship who is carrying the debt, I can confirm that a lot of thought went into the conversation I had with my now husband about what debt I had and how I got it. My approach was to just lay it all out there. I had a spreadsheet with totals, interest rates and expected payoff dates. However, I didn't bring it up until we started to head towards marriage.

According to SoFi, Millennials don't think debt needs to come up right away. 58 percent say it only needs to be talked about when the relationship gets serious.

Finally, SoFi asked Millennials if they would dump someone over debt. A majority, 55 percent, said no. (Still, 24 percent said they may not consider marrying someone with more than $100,000 in debt.)

Let me know if you have any horror stories of dating someone in debt OR if you have stories about getting out of debt quickly for the sake of your relationship!