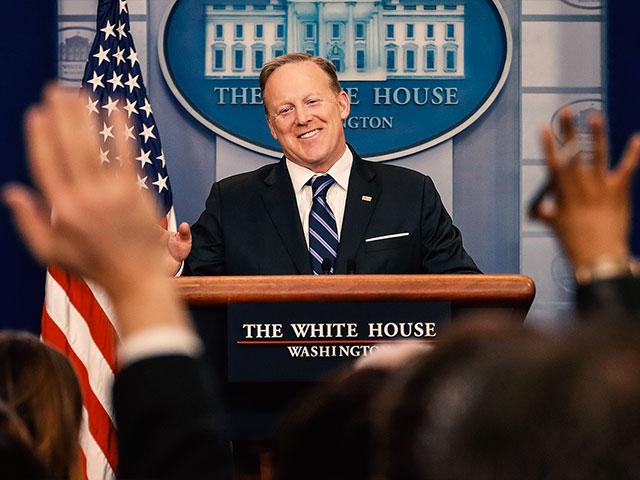 For a guy about to get a promotion, Sean Spicer sure has been on the brink of professional doom for months now.

Despite a slew of media reports that the president despises him and his days are numbered Spicer remains in his post as press secretary and it appears he'll soon be elevated to Communications Director (The Spicer story is a great example of the pack journalism coming out of the White House that too often is wrong).

For weeks when people have asked me if I thought Spicer was getting the ax, I've suggested the opposite, that it's likely he'll be elevated to Communications Director. The position Mike Dubke resigned from last month. Most people responded by looking at me like I'm crazy, because they were reading the headlines.

It's true that it's been a bumpy ride for Spicer. He's made some pretty extraordinary unforced gaffes- remember when he suggested Hitler didn't use chemical weapons during WWII? That one probably still stings.

However, he also has the tough job of speaking for and defending an outsider president, unbeholden to tradition who almost daily releases cryptic messages in 140 characters or less that usually require interpreting. Let's face it, the first few months of this administration would have been a wild ride for any press secretary, even somebody more polished.

Speculation that Spicer's head was on the chopping block intensified when he wasn't seen much on the president's World Religion tour to the Middle East nor in the briefing room when he returned to Washington.

The change in the briefing schedule came as the Trump administration worked to grab hold of its messaging in the midst of the funnel cloud that is the Russia investigation.

Tuesday during his first on- camera briefing in a long time, Spicer chucked, "I'm still here," when asked about rumors of a job change. "You can keep taking your selfies," he continued with a smile. A quip possibly aimed at CNN's Jim Acosta who tweeted a picture of his new socks Monday since the press briefing was off camera (that includes no mobile phone photos of the press secretary).

The Spicer off-camera/no audio gaggle has begun. I can't show you a pic of Sean. So here is a look at some new socks I bought over the wknd pic.twitter.com/wO9erspwYa

After tweeting that photo, Acosta went on the air and called Spicer "kinda useless".

Tuesday when the briefing was on camera, Acosta tweeted a selfie.

It's no secret that we've had a couple vacancies including our communications director who's been gone for a while," Spicer said during his 30 minute briefing Tuesday.

"We've been meeting with people who may be of service to this administration, I don't think that should come as any surprise, but we're always looking for ways to do a better job of articulating the president's message and his agenda," he continued.

Names floated as possible replacements for Spicer behind the podium when he gets his promotion include Spicer's deputy Sarah Huckabee Sanders, conservative commentator Laura Ingraham and Fox News co-host of The Five Kimberly Guilfoyle.