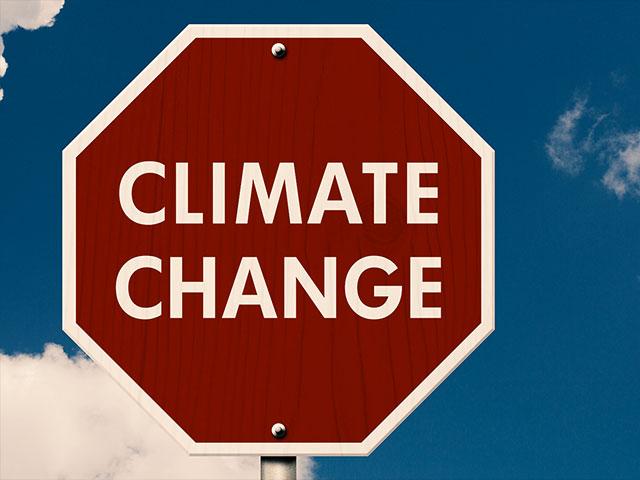 For more, follow Dale on Twitter @DaleHurd and at Facebook.com/DaleHurdNews
Now that the media is making Donald Trump the new Hitler for announcing that the U.S. will have nothing to do with the stupid Paris Climate Accord, how about we take a short diversion from the online handwringing and end-of-the-world hysteria (Actor Mark Ruffalo says "Trump will have the death of whole nations on his hands") and look at some facts.
The Earth stopped significant warming in the 1990's.  Warmists have admitted this and call it "the pause."  We don't know why the Earth warmed significantly in the 1900's, but it's just as likely that it was a rebound from the cold period known as "Little Ice Age," which lasted from about 1300 until 1870. There is evidence that the "Medieval Warm Period" that preceded it from 900-1300 was as warm as today, but without ExxonMobil.
The extent of Arctic sea ice in 2017 is normal and grew significantly over the past year.  Read it and weep, warmists.
Still more bad news for warmists: Greenland ice is at a near record.
Dr. Richard Lindzen, Alfred P. Sloan Professor of Atmospheric Sciences, Emeritus at MIT has said that believing CO2 controls the climate "is pretty close to believing in magic."
So, why do warmists still need a Paris Climate Accord so badly? Because the belief in climate change is not rooted chiefly in science. It's a secular religion in which man's mere existence is bad for the Earth. This is opposite of the Bible's stated role for man and Earth, and that difference alone should trouble Christians who believe this warming bunk.
The Global Warming "crisis" was reverse-engineered by leftists who hate capitalism and corporations and needed a spiritual home after the fall of communism. To quote the biochemist Bruce Ames of UC-Berkeley, "God died, then Marx, so now they're worshipping the planet."
Most importantly, the Paris Climate Agreement will cost at least $1 trillion per year but reduce global temperatures by only 0.023 degrees Fahrenheit by 2100.
Even James Hansen, the father of global warming alarmism, once called the Paris Climate Agreement a "fraud," a "fake" and "just worthless words."
About the only thing the Paris Climate Accord accomplishes is to serve as a religious indulgence; to give those who feel guilty about the unparalleled comfort and economic super abundance in the present age a way to pay for their "sins" and the illusion that they are sacrificing for the salvation of the planet.
Then there are the scientists, businesses and politicians who believe the climate threat is a either grossly overblown or a hoax, but are held hostage by the propsepct of losing grant money or being boycotted.
Add to that a lot of well-meaning individuals who have been indoctrinated by a global propaganda campaign under the cover of news.
But a trillion dollars a year so that some rich people feel better?
President Trump, a shrewd businessman, knows a dumb investment when he sees one.
More from
Hurd on the Web
09-06-2017
Don't Buy the Global Warming Hype About Irma
06-14-2017
The Left's Descent into Bloodshed
06-01-2017
The Paris Climate Accord is Dumb
05-01-2017
Why Is China 'Urgently' Recruiting Korean-Chinese Interpreters?
04-25-2017
A Warning Email About the Next French President
04-11-2017
A Lot of Swedes Still Haven't Woken Up
03-23-2017
Is a Muslim Takeover of Britain Already Underway?
03-17-2017
Friday Muslim Blood Sacrifice: Two Men Slaughtered in Paris
03-09-2017
Too Many Muslims? French Mayor on Trial
03-01-2017
Why Being a Russian Diplomat Poses a Serious Risk to Your Health
01-17-2017
Fact Check: Obama Administration 'Scandal-free'?
11-11-2016
Are Obama's High Approval Numbers Bogus, Too?