Trump's Inaugural Speech, Mentions of Faith Compared to Past Presidents 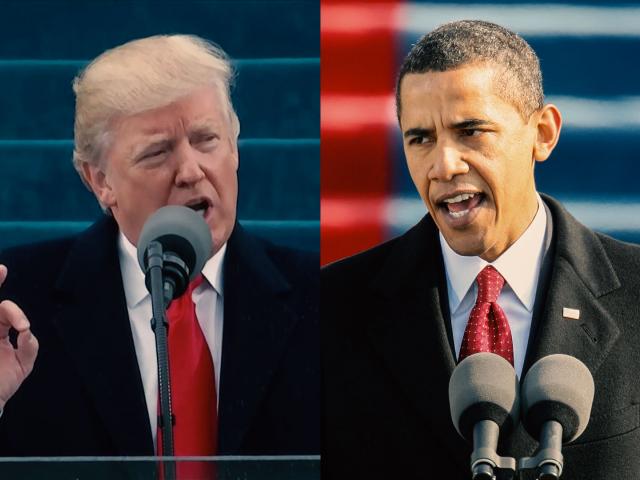 Although Donald Trump's Inaugural address may be viewed mostly as a populist, anti-establishment speech, it did contain several references to God.

After he was sworn in--with his left hand placed atop two Bibles held by wife Melania, Trump spoke of the nation being protected by the "great men and women of our military and law enforcement." But he reminded Americans that most importantly, "we will be protected by God."

The president said he wanted to model his inaugural speech after those delivered by two presidents he admired: John F. Kennedy and Ronald Reagan. Both those presidents—and Barack Obama—honored a long-standing tradition of mentioning God and faith in American presidential inaugural addresses.

At his Inaugural on January 20th, 1961 President Kennedy told attendees they had witnessed a swearing-in which was conducted "before Almighty God."

The youthful, 43-year old president said still at issue around the globe was the belief that "the rights of man come not from the generosity of the state but from the hand of God."

Kennedy concluded his address with, "…let us go forth to lead the land we love, asking His blessing and His help, but knowing that here on earth God's work must truly be our own."

Ronald Reagan's Inaugural on January 20th, 1981 was the first presidential inaugural ceremony to be held on the West Front of the U.S. Capitol. His address actually contained few references to God and religious faith.

Mr. Reagan expressed gratitude for the tens of thousands of prayer meetings held on the day. "We are a nation under God, and I believe God intended us to be free."

In contrast, during his First Inaugural address, President Barack Obama spoke of America's patchwork heritage, a nation of various faiths: "Christians and Muslims, Jews and Hindus, and non-believers."

Absent from Mr. Obama's speech was a mention of Judeo-Christian values, or Godly values, however, he did mention "values upon which our success depends—honesty and hard work, courage and fair play, tolerance, and curiosity, loyalty and patriotism—these things are old. These things are true: A quiet force of progress throughout our history."

He said the source of our confidence is the knowledge that God calls on us to shape an uncertain destiny" which is the meaning of our liberty and creed."

In his address Friday, President Trump acknowledged that one of his first tasks will be to heal and unify the nation. He knows God is pleased with a nation that is unified.

"The Bible tells us how good and pleasant it is when God's people live together in unity. We must speak our minds openly, debate our disagreements honestly, but always pursue solidarity. When America is united, America is totally unstoppable," Trump said.

Eight years ago, as Barack Obama concluded his First Inaugural address he spoke of leaving a better America for future generations.

"Let our children's children say that...with eyes fixed on the horizon and God's grace upon us, we carried forth that great gift of freedom and delivered it safely to future generations."

President Trump also mentioned America's children in his address saying they are all the same regardless of their place of birth.

"Whether a child is born in the urban sprawl of Detroit or the wind-swept plains of Nebraska, they look up at the same night sky, they will their heart with the same dreams, and they are infused with the breath of life by the same almighty creator."

Both Barack Obama and Donald Trump ended their speeches with, "Thank you. God bless you. And God bless America!"

May God bless both our incoming and outgoing presidents as they seek Him and His guidance for the future!